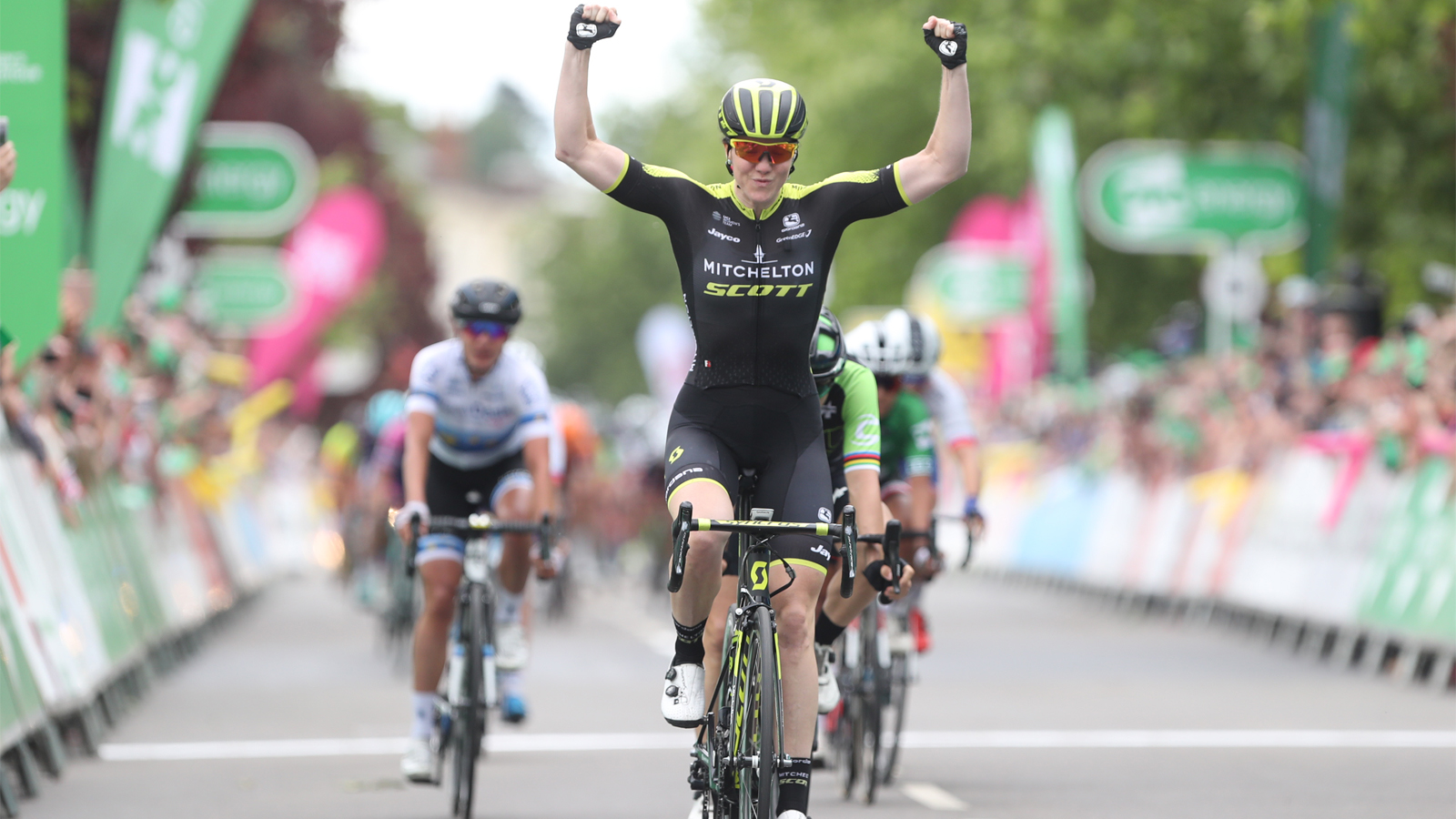 Mitchelton-SCOTT made it two wins in three days at this year’s OVO Energy Women’s Tour on Friday, as Australian Sarah Roy sprinted to victory in Royal Leamington Spa.

Mitchelton-SCOTT made it two wins in three days at this year’s OVO Energy Women’s Tour on Friday, as Australian Sarah Roy sprinted to victory in Royal Leamington Spa.

Fourth place for overnight leader Coryn Rivera (Team Sunweb), combined with time bonuses taken at the intermediate Eisberg Sprints in Wellesbourne and Kenilworth, saw her extend her lead on GC. Vos, the winner of the race in 2014, is now her nearest challenger at 16 seconds thanks to her accrued finish time bonus.

The finish of stage 3 here in Royal Leamington Spa!

Roy, who won a stage at Chesterfield during the 2017 race put her success down to the work of her team and thorough preparation.

“In the final kilometre I was really well looked after,” said the Mitchelton-SCOTT rider.  “Any important parts of the race we try to research beforehand and talk about a lot, and we go and look at on Google Street View. So we were really well researched today and I was really well prepared. I think that helped.

“I wasn’t confident coming over the climbs today, I didn’t have a great day yesterday so I really tried to turn it around today.  You saw it, I was a little bit overwhelmed at the finish there and had a few tears.

“My team have given me the opportunity today and I thought I’m going to take this one and give it all I’ve got.  You’ve seen them work their butts off out there covering all their attacks and I was just super thankful for their work out there today, so to pull it off is the nicest feeling.”

Sunshine and warm temperatures welcomed the OVO Energy Women’s Tour to Warwickshire for the third time, with large crowds cheering the riders off from the centre of Atherstone on the 150-kilometre leg.

A fast start to the stage saw the racing stay together until the first Eisberg Sprint at Kenilsworth, with Rivera taking the honours from Christine Majerus (Boels-Dolmans).

The regrouping at the front brought 35 riders together to contest the fast run back to Royal Leamington Spa, which was marked by a flurry of attacks from a multitude of teams and riders, in particular the Canyon//SRAM squad of defending champion Kasia Niewiadoma. However, no cohesive move could stay away.

Coming through the sweeping left hander into the 400-metre finishing straight alongside Jephson Gardens it was Vos who led out the sprint, but Roy and Bronzini who came past on the long run to the line. Rivera took fourth, Roxanne Fournier fifth, and Rowe top Brit in 10th.

Speaking afterwards having retained her OVO Energy Green Jersey for a second day, Team Sunweb’s Rivera said: “For sure it was not easy out there. The girls were really strong today and we had five other than over the last climb so we were just covering attacks. They are trying to make it hard for us.”

“It’s pretty special, I don’t see myself as a general classification rider so it’s a different mindset I have to put in my head,” she said. “But it is really special to be wearing it and having all the girls believing in me – it is quite a responsibility.  It’s nice to be over halfway [through the race], but still anything can happen and we have to be on our toes.”

Elisa Longo Borghini picked up maximum points on the second SKODA Queen of the Mountains climb to extend her lead in the climber’s jersey to 13 points over Niewiadoma.

The weekend sees Stage Four take place in Worcestershire heading from Evesham to Worcester on Saturday (16 June), before the final day (Sunday 17 June) visits Wales, with Stage Five taking place from Dolgellau to Colwyn Bay on the North Wales coast, via Snowdonia.

Click here for full results from Stage Three of the OVO Energy Women’s Tour from Atherstone to Royal Leamington Spa.