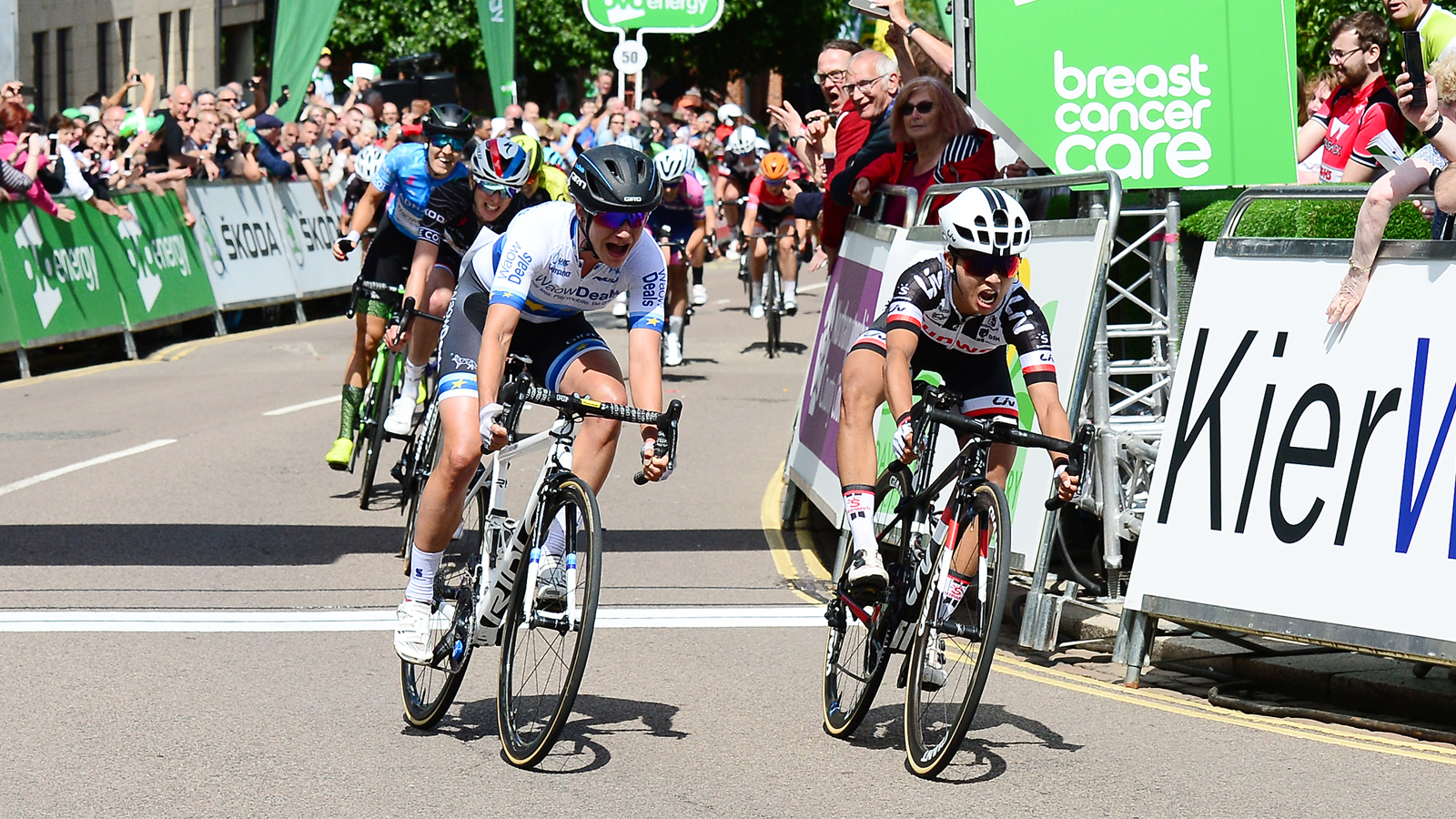 The Californian rider for Team Sunweb survived the double ascent of the SKODA Queen of the Mountains climb of Newnham Hill on the outskirts of Daventry to pip Vos and move into a 15-second lead ahead of day three in Warwickshire.

Briton Dani Rowe (WaowDeals Pro Cycling) sits second, with her team-mate Vos a further second in arrears. A further thirteen riders are all within 23 seconds of Rivera on GC with three days of racing remaining.

Click here for full results from Stage Two of the OVO Energy Women’s Tour from Rushden to Daventry.

Having contested the day’s final intermediate Eisberg Sprint on the first passage of the finish line in Daventry – won by Rowe – the group were pulled back as Team Sunweb, and in particular Floortje Mackaij, worked hard for Rivera.

“We weren’t represented so did have to do something but we didn’t panic,” said Rivera afterwards of that elite but short-lived breakaway that preceded her first victory in the OVO Energy Women’s Tour.

“I just communicated to Floortje, who was riding really well today, to help me pace to it. Then as we got closer to the top I was able to bridge across to the climbers in the front group. Luckily we already had Ellen [Van Dijk] in there [by then] and so I just communicated to her to just drive it.”

Van Dijk’s pace setting on the three-kilometre run back to Daventry from the final climb kept the front group of 18 riders together and warded off any further attacks, setting up a thrilling finish. Rivera’s tighter line through the curved finish, combined with a fantastic last-ditch bike throw, gave her the win over Vos.

Team Sunweb coach Hans Timmermans (NED) said: “We stayed cool as the late break went clear and after they were brought back we still had four riders in the leading group. In the final the girls positioned Coryn super good and when the front group went clear, Ellen could follow. Coryn bridged across on the final climb with two and a half to go and from there it was full gas towards the finish line to gain some time.

“There are still three days to go so we will race smart and not spend too much energy on defending, but it’s a great confidence boost to take the win today.”

Second-placed Rowe continues to lead the Adnams Best British Rider classification while Rivera also moves into the Breast Cancer Care Points Jersey and Eisberg Sprints Jersey.  Thanks to her performances on Newnham Hill, Wiggle HIGH5’s Elisa Longo Borghini takes the lead in the SKODA Queen of the Mountains classification with a 10-point advantage over erstwhile leader Christine Majerus (Boels-Dolmans).

Friday’s stage sees the race return to Warwickshire for the third-successive year with Stage Three covering 150 kilometres from Atherstone to Royal Leamington Spa, via the likes of Kenilworth, Warwick and Wellesbourne.

Click here for full results from Stage Two of the OVO Energy Women’s Tour from Rushden to Daventry.