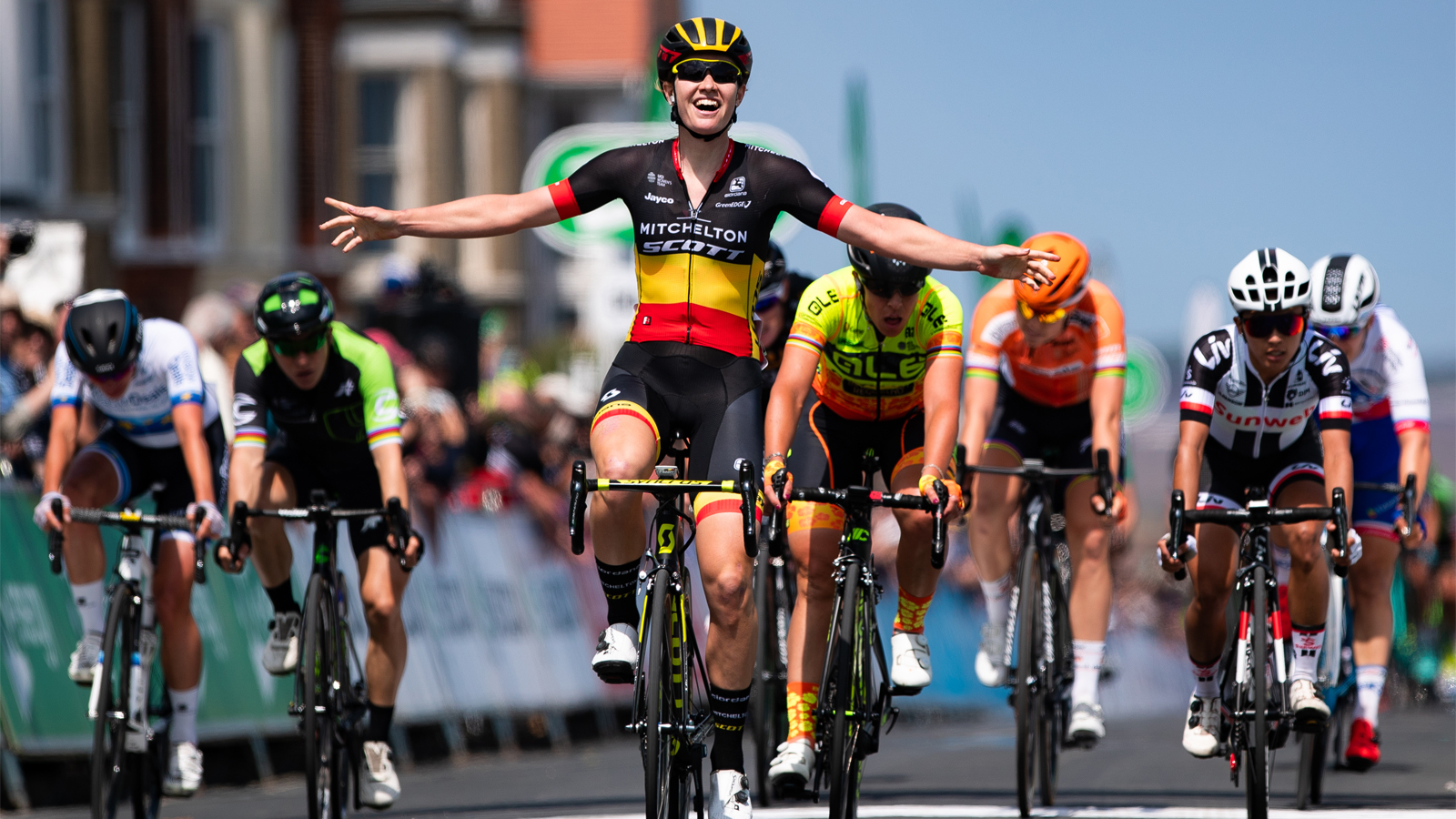 Jolien D’hoore opened up her 2018 OVO Energy Women’s Tour just as she left off in London in 2017 by sprinting to victory at the head of a world-class field in Southwold, Suffolk on Wednesday.

Jolien D’hoore opened up her 2018 OVO Energy Women’s Tour just as she left off in London in 2017 by sprinting to victory at the head of a world-class field in Southwold, Suffolk on Wednesday.

The Mitchelton-SCOTT rider headed to victory at the seafront finish ahead of former World Champion Marta Bastianelli (Alé Cipollini) and Coryn Rivera (Team Sunweb) to pull on the first OVO Energy Green Jersey of the 2018 race.

D’hoore, who broke her collarbone three weeks ago, was given a perfect lead out by her team-mates out of the final corner with 340 metres to go to take her third win in the race, following victories at Clacton (2015) and London (2017).

Click here for full results from Stage One of the OVO Energy Women’s Tour from Framlingham to Southwold.

“Even before today’s stage I wasn’t sure where I was at with my form,” said D’hoore. “But the team had 100% trust in me and they gave me a perfect lead out going into the finish. It’s really great to start with a win, the pressure is off now.”

“The stage was pretty flat and everyone knew that it was going to come down to a sprint, but it got pretty nervous and hectic going into the final and thankfully I was in a really good position on the last corner.

“I started my sprint a little early but managed to hold on and it worked out really well in the end. We had a plan going into the stage and we struck to it perfectly. The finish was quite tricky going into the wind and slightly uphill, but it couldn’t have gone any better.”

D’hoore also takes the Breast Cancer Care Points jersey thanks to her win, while the Boels-Dolmans team claimed both the SKODA Queen of the Mountains jersey with Christine Majerus and Eisberg Sprints jersey through Amy Pieters.  WaowDeals Pro Cycling’s Dani Rowe finished the stage as the top Brit overall in fifth and so took the Adnams Best British Rider jersey, in the hometown of the Suffolk brewer.

Mitchelton Scott team manager Martin Vestby described the opening day as the “perfect start.” He added: “It’s a true team victory today and everyone was involved. We will do our best to hold onto the green jersey tomorrow, but it is a completely different stage with lots of climbing and for sure it will be tough.”

Stage Two sees the OVO Energy Women’s Tour return to Northamptonshire for the fifth time with a 143-kilometre stage from Rushden to Daventry. The key feature is a double ascent of Newnham Hill, which measures 1.5 kilometres in length at a six per cent gradient. The second of the climb culminates just three kilometres from the finish and is likely to prove decisive in the outcome of the stage.

Click here for full results from Stage One of the OVO Energy Women’s Tour from Framlingham to Southwold.