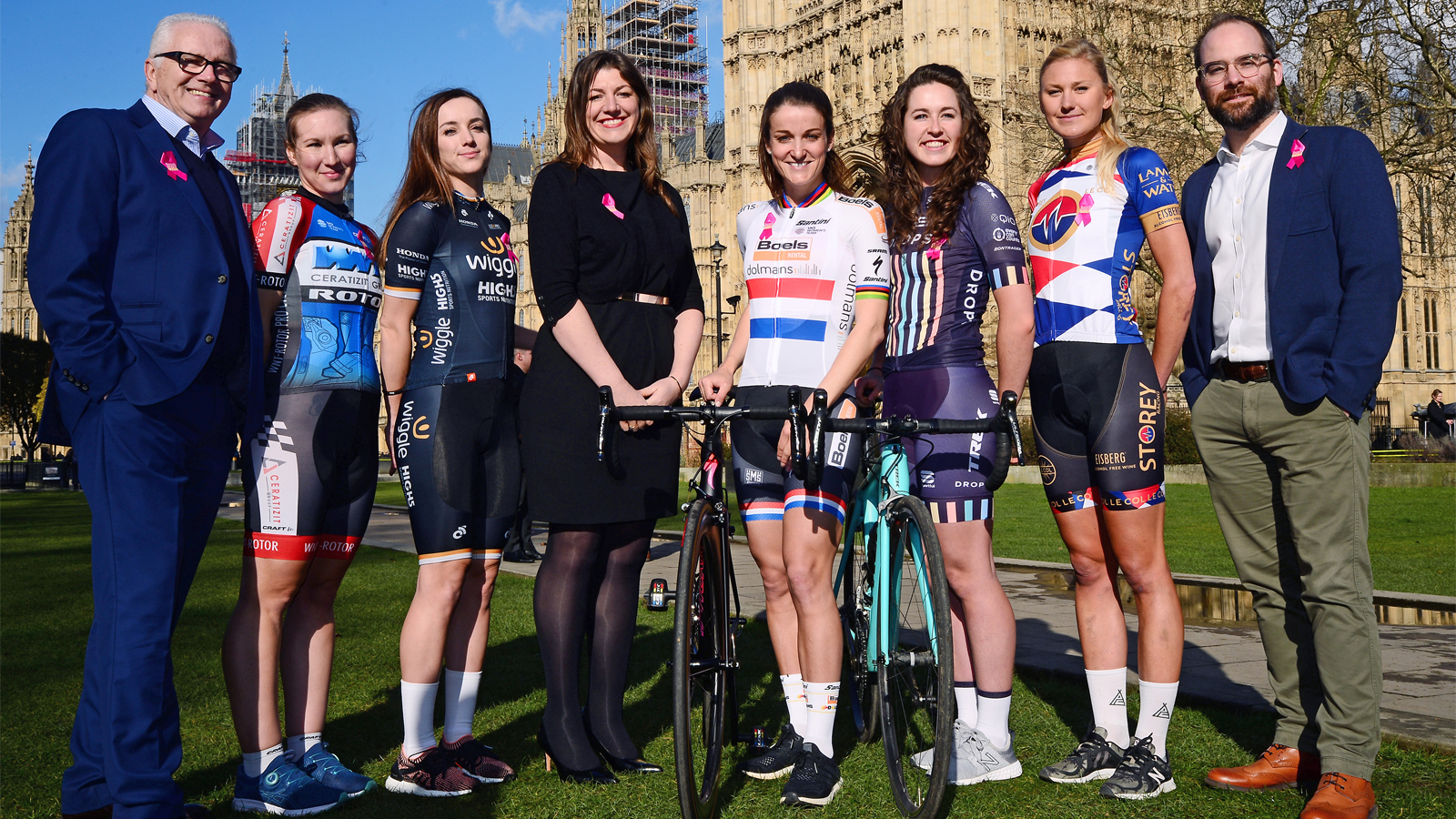 The announcement came today (Wednesday 7 March) at a reception held inside the Houses of Parliament as SweetSpot, organisers of the OVO Energy Women’s Tour, and OVO Energy launched a challenging five-day route for the 2018 race.

Lizzie Deignan, former Road World Champion and Women’s Tour 2016 winner, said: “I’m so excited about the 2018 OVO Energy Women’s Tour; the race is the pinnacle of women’s professional road cycling in the UK, and it’s an important step to offer equal prize money to the comparative men’s race. To be honest, I wish gender parity wasn’t an issue in cycling; I think I speak on behalf of most women in the peloton when I say I just want to get on and compete and be recognised fairly for what we do. So this support from OVO Energy means we can now focus on playing our part in an amazing race.” The 2018 OVO Energy Women’s Tour, which forms part of the UCI Women’s WorldTour, will begin in East Anglia, with five stages taking the race to Suffolk, Northamptonshire, Warwickshire and Worcestershire, before a final day’s stage through the Snowdonia National Park and a first overall finish in Wales.

Both stage prize money and overall GC will pay down to 20th place. There are four race jerseys up for grabs in the Tour of Britain and five in the Women’s Tour. Each will command a €150 prize for the daily holder, and a €1,000 prize for the overall winner. Both the OVO Energy Women’s Tour and OVO Energy Tour of Britain have a general classification prize fund of €36,220.

Emma Pooley, presenter for Global Cycling Network (GCN) and former professional athlete, said: “There’s been a long campaign for parity in cycling, and I strongly believe that women’s racing should be moving towards equal racing opportunities and equal media coverage. The OVO Energy Women’s Tour is already leading the way in this, and a major step to addressing the imbalance in cycling’s economy is equal prize funds for high quality races. Women’s cycling has a huge amount to offer fans and sponsors alike and I believe it will further inspire more women to ride bikes.”

Chris Houghton, CEO Energy Retail at OVO Energy, said: “Our announcement today is a meaningful step towards gender parity in cycling and we’re proud to play our part in supporting the development of professional women’s sport. We’re incredibly excited to support the OVO Energy Women’s Tour over the next two years, helping to provide an equal platform on the world cycling stage.”

Mick Bennett, Race Director at Sweetspot, said: “We are delighted to be able to launch the route for the fifth edition of the OVO Energy Women’s Tour from the Houses of Parliament, illustrating how in five years we have developed the race to what we believe to be the best event on the women’s cycling calendar.  This year we have our most challenging route to date and are delighted to be working with the Welsh Government to bring the OVO Energy Women’s Tour to the Principality for the first time, for what we are sure will be a very well received final stage.

“As organisers we are delighted by the increased commitment of OVO Energy in relation to prize money; their passion and support for the event will further enhance the development of the sport as well as the Women’s Tour.”

Suffolk will welcome the return of the OVO Energy Women’s Tour after a year’s absence, with Framlingham hosting the opening stage start, with the finish on the coast in Southwold, home of brewers Adnams, the partners of the race’s Best British Rider Jersey.

The second stage will see the race visit Northamptonshire for the fifth year in succession, with a double ascent of the tough Newnham Hill climb set to provide a thrilling finale to the Daventry stage finish.

Day three will see a repeat of the Warwickshire stage won in 2017 by Chloe Hosking between Atherstone and Royal Leamington Spa before the fourth stage in Worcestershire.

The fifth edition of the race will travel outside of England for the first time, with the Welsh Government hosting the final stage in Gwynedd and Conwy in North Wales.  A tough final stage from Dolgellau to Colwyn Bay will take the peloton through the Snowdonia National Park with a route including tough climbs and world-class scenery.

Welsh Government Minister for Culture, Tourism and Sport, Lord Elis-Thomas, said: “I’m delighted that we’re able to support this race for the first time this year. As Britain’s only international level stage race for women, the event attracts the best female riders in the world – and is an excellent event to raise the profile of the sport and encourage participation. The route will also be showcase to Wales’ landscapes and will also highlight some of our epic shores which we’re celebrating during the Year of the Sea in 2018.”

In addition to the professional race, amateur cyclists will be able to take part in the official sportive on Sunday 1 July in aid of Breast Cancer Care, the Official Charity of the OVO Energy Women’s Tour. Starting and finishing in Southwold, home of Official Partners Adnams, riders will have the chance to ride one of two rides taking in the Stage One route in Suffolk.

Claire Pulford, Head of Events at Breast Cancer Care said: “We are absolutely delighted to be partnering with the OVO Energy Women’s Tour for a second year.

“It is particularly exciting for Breast Cancer Care to be involved in this year’s OVO Energy Tour Ride. The Ride will help our charity continue to support and make a positive difference to the lives of the thousands of people facing breast cancer in the UK.”

In total 17 teams will compete in the 2018 OVO Energy Women’s Tour, including four British squads, Wiggle HIGH5, Trek-Drops, WNT-Rotor and Storey Racing, with the riders set to compete in the race and battle to succeed Kasia Niewiadoma as the OVO Energy Green Jersey being announced during the early summer.