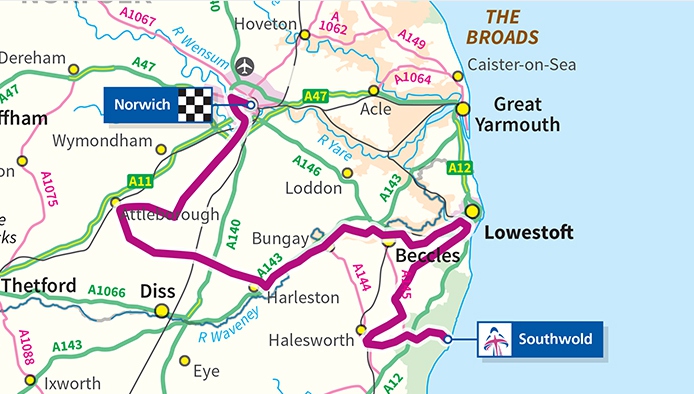 The Aviva Women’s Tour will return to East Anglia for the opening stage of the race, as the world’s top riders head from Southwold to Norwich on Wednesday 15 June.

The Aviva Women’s Tour will return to East Anglia for the opening stage of the race, as the world’s top riders head from Southwold to Norwich on Wednesday 15 June.

It will mark the first occasion that the Aviva Women’s Tour has visited Norfolk, while Suffolk will host a stage of the race, which is now a part of the UCI Women’s WorldTour, for the third successive year.

The race will begin from Southwold, home of principal stage partners Adnams, who have supported the Aviva Women’s Tour and Tour of Britain stages in Norfolk and Suffolk since 2010.  It will mark the first occasion that either event has visited Southwold.

“Its great news for Suffolk that the Women’s Tour will be returning to the county for the third year in a row and it’s a real honour to be chosen to host the Grand Depart for the second year in succession, which is testament to the fantastic reception and support that the race and riders receive when visiting Suffolk.

“The Women’s Tour provides a significant boost for the local economy, whilst showcasing Suffolk’s picturesque towns, villages, coast and countryside to a worldwide audience as World and Olympic champions pass through Suffolk’s local communities.

“Cycling for pleasure, sport or transport is a fantastic way to keep active and we hope that by attracting these high profile events to the county that it will inspire more women and girls across Suffolk to take up cycling or some form of sport and physical activity, assisting us in our bid to become the most active county in England” “Following the success of the Tour of Britain coming through Norfolk last year, we are really excited to now be welcoming the Women’s Tour to the County, and proud that Norwich will be hosting the grand finale.  This is a fantastic opportunity for us to promote cycling across the County, and with statistics showing that cycling is still a predominantly a male sport it is a fantastic example to help encourage more women out on their bikes and getting more active.”

“As proud supporters of the Women's Tour, we're delighted to be hosting the prestigious Grand Depart in our home town. We hope it will bring a great deal of visitors to Southwold to watch the race and find time to explore what the area has to offer, including all things Adnams!” “We are pleased to be able to return to Suffolk, a county which has played a key role in the development of the Aviva Women’s Tour, but also to visit Norfolk for the first time with the race.  The start in Southwold will also allow us to work with Adnams, our long term partners for both the Aviva Women’s Tour and Tour of Britain, and to bring the race to their home town, while the finish in Norwich will be hugely important for our title sponsors Aviva as one of their key locations.

“The opening stage should be one for the sprinters with a largely flat route skirting the Broads before the finish in Norwich city centre.” Further news about the detailed route of Stage One including the locations of the Strava Queen of the Mountains climbs and the Chain Reaction Cycles Sprints, along with timings will be announced in the coming weeks along with the teams spectators can look forward to seeing in action at the Aviva Women’s Tour.