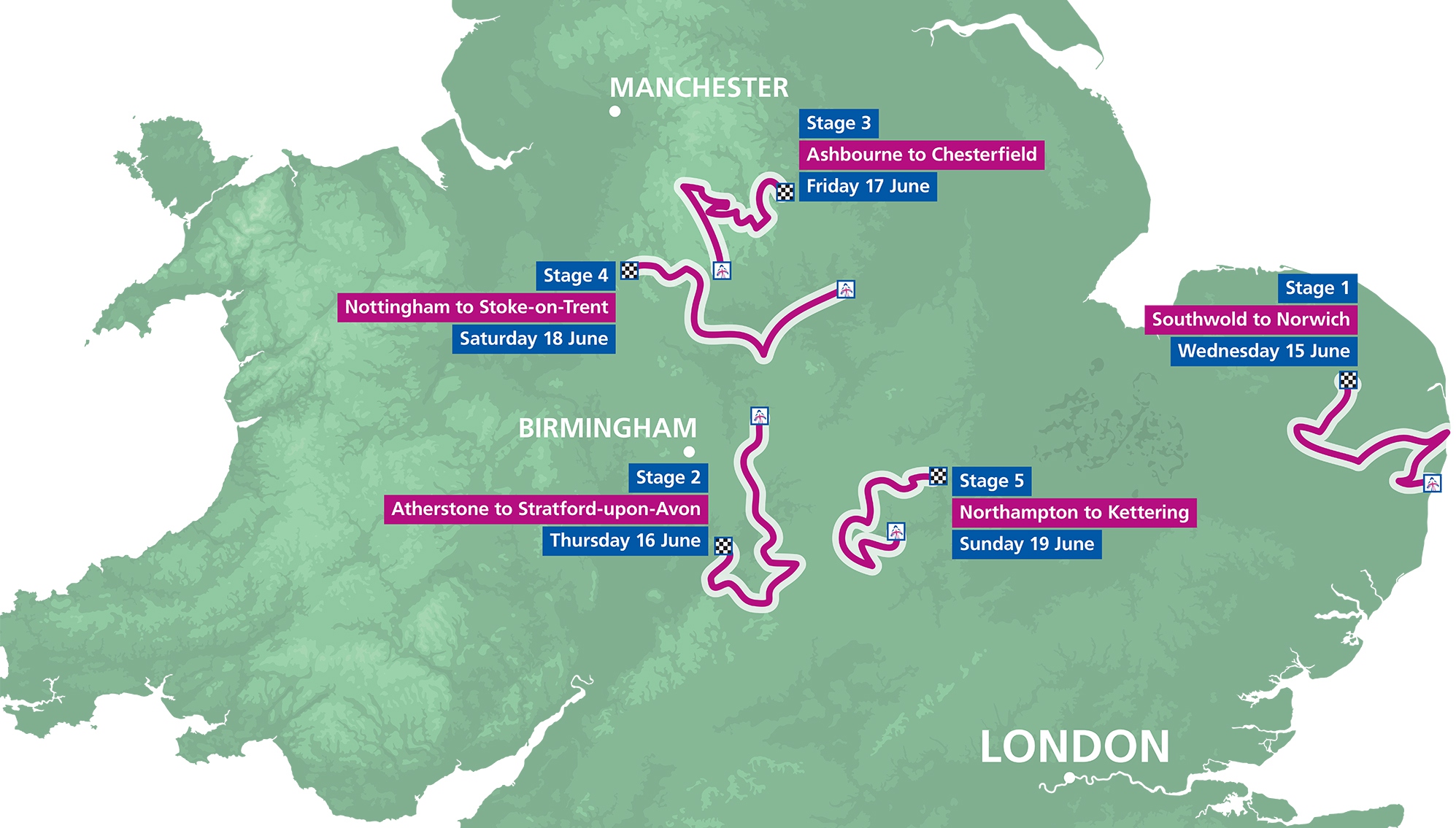 The Aviva Women’s Tour, Wednesday 15 to Sunday 19 June, has today presented a new-look route for 2016, with increased climbing and four stages in the heart of England, including a visit to the Peak District National Park.

The Aviva Women’s Tour, Wednesday 15 to Sunday 19 June, has today presented a new-look route for 2016, with increased climbing and four stages in the heart of England, including a visit to the Peak District National Park.

Taking place over five days, the 2016 edition of the race will be a part of the new UCI Women’s WorldTour calendar, currently one of just four multi-day stage races on the season long programme of races for the world’s top riders and teams.

The race will begin at Southwold on the Suffolk coast, before Norfolk becomes one of five counties to make their debut on the route, hosting the opening stage finish in Norwich city centre.

Stage Two will see a first visit to Warwickshire, with a 140-kilometre stage between Atherstone and Stratford-upon-Avon on Thursday 16 June.

A day later the peloton will face the first of two days in and around the Peak District, with 2,000-metres of climbing on the route between Ashbourne and Chesterfield in Derbyshire on the Friday through the heart of the Peak District National Park.

The cities of Nottingham and Stoke-on-Trent will bookend Stage Four on Saturday 18 June, with a route that includes a hilly finale through the Staffordshire Moorlands before the finish in the 2016 UK European City of Sport.

The race will conclude in Kettering, where Christine Majerus took a stage win in the 2015 edition, with Stage Five beginning in Northampton, which hosted the very first stage finish of the Aviva Women’s Tour in May 2014. “We are delighted to present the route for the 2016 Aviva Women’s Tour with a significantly tougher parcours than the previous editions, as requested by the team’s following last year, allowing us to take the race to some new areas. The interest from venues around the country to host the race has been huge, allowing us to put together an attractive route that will make not only for excellent racing, but also big crowds from the major towns and cities on, or close to the route.

“When we created the Women’s Tour in 2014 we said that our aim was for the event to be the world’s best women’s race within three years and it is our firm belief that being a part of the new UCI Women’s WorldTour sees us well on course to do so.”

Highlights of each stage will once again be shown by ITV4 every evening during the race.

“The 2016 route looks fantastic and will definitely provide a real test to the teams and riders taking part this year. It’s great that the Aviva Women’s Tour will be reaching parts of the country that it has never visited before while also passing through some locations that have so openly embraced it in the past. This year’s race looks all set to be the best so far.” Further news about the detailed stage routes, including the locations of Strava Queen of the Mountains climbs and the Chain Reaction Cycles Sprints, along with timings will be announced in the coming weeks along with the teams for the 2016 Aviva Women’s Tour.