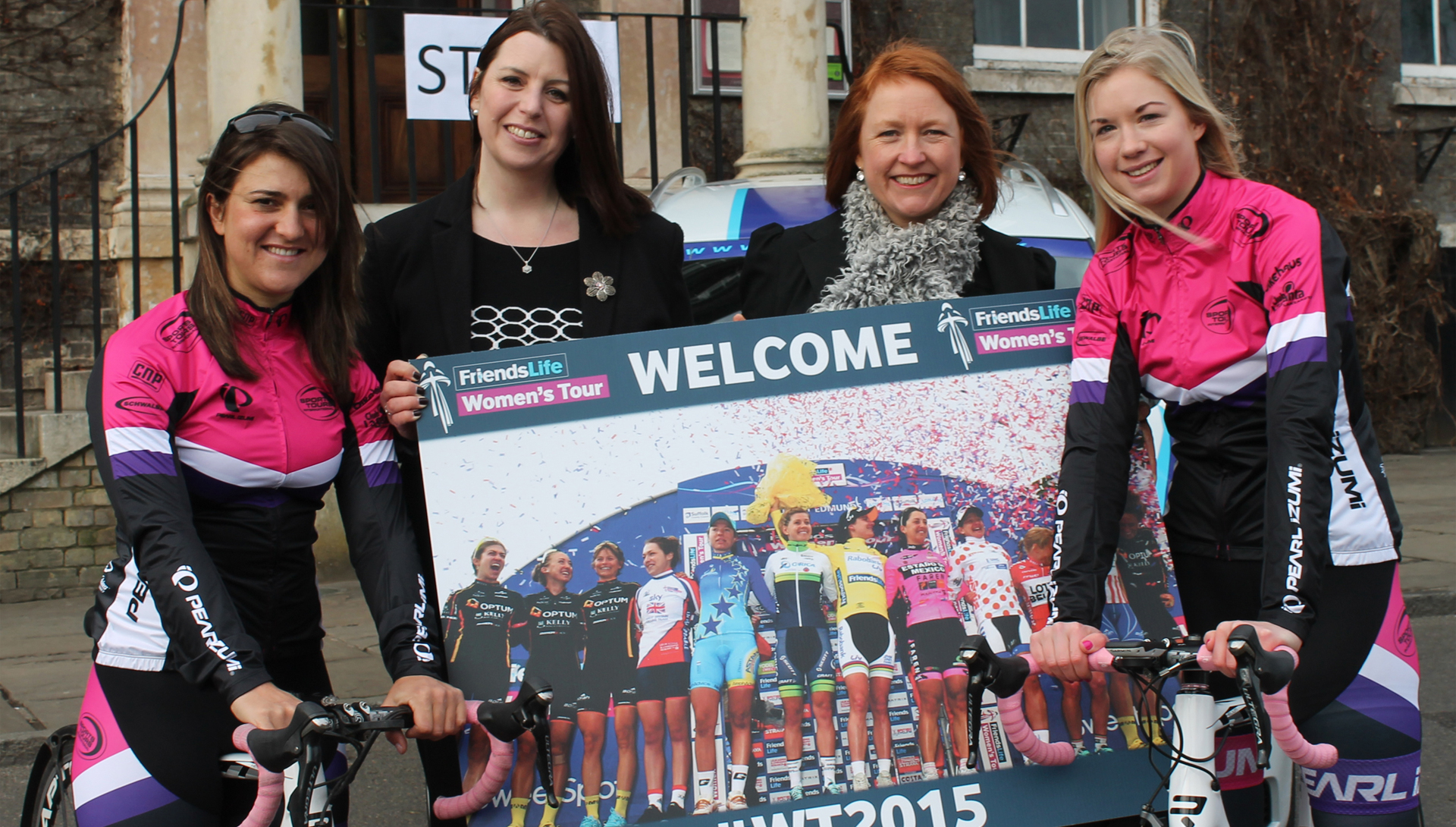 Details of opening stage of the Friends Life Women’s Tour from Bury St Edmunds to Aldeburgh announced, marking 100 days to go until the race and yesterday’s International Women’s Day.

Details of opening stage of the Friends Life Women’s Tour from Bury St Edmunds to Aldeburgh announced, marking 100 days to go until the race and yesterday’s International Women’s Day.

Riders and organisers have today marked 100 days to go until the Friends Life Women’s Tour, by officially launching the opening stage in Suffolk.

Further details of the opening stage of the 2015 Friends Life Women’s Tour, which will start from where the 2014 Tour finished on Angel Hill in Bury St Edmunds, were announced.

The 110.2-kilometre, (68.5mile), leg will be entirely within Suffolk passing through five Boroughs and Districts – St Edmundsbury, Mid Suffolk, Babergh, Ipswich and Suffolk Coastal – with an expected finish around 14:15 on Wednesday 17 June.

Heading east from Bury St Edmunds, the opening stage will take in Stowmarket, Ipswich, Woodbridge Saxmundham, and Leiston, before the final run in to Aldeburgh along the coast south from Thorpeness, with the finish on the Market Cross. Full stage mapping from Ordnance Survey of all five Friends Life Women's Tour stages will be available during late March.

Two sprints will take place during the stage at Kesgrave, outside Kesgrave High School, and a second to be confirmed location. Riders will also tackle two Queen of the Mountain climbs at Hemmingstone, north of Ipswich, and at Snape, home to the world famous Concert Hall which is operated by Aldeburgh Music .

“In 100 days Suffolk will be host to the world’s top teams and female riders for the opening stage of the Friends Life Women’s Tour, with some beautiful scenery and a great location”, said Race Director Mick Bennett.

“We are expecting an exciting sprint finish in Aldeburgh, with the stage winner becoming our first Friends Life Yellow Jersey of the 2015 race.”

Emma Hibbert Marketing Director for Adnams, the principal sponsors of the opening stage, said: “We’re delighted to support Stage One of the Friends Life Women’s Tour as it passes through the heart of ‘Adnams country’. We’re hoping for a terrific turnout of supporters once again this year. The riders will enjoy some superb Suffolk scenery as they head towards the Aldeburgh coast and will pass many Adnams pubs and shops along the way. But unfortunately I don’t suppose they’ll have time to stop!”

“We are delighted to be hosting the Friends Life Women’s Tour in the county again following the massive success of the inaugural event in 2014; it is a real coup to have secured the Grand Depart in Bury St Edmunds.

“Cycling is a fantastic way to build exercise into everyday life and with the recent launch of Suffolk’s Year of Cycling; coupled with prestigious international events such as the Friends Life Women’s Tour visiting the county, we hope it will inspire people to get on their bikes, whether it’s for travel, leisure or sport.

“Suffolk is a fantastic county for cycling and without doubt it can make a significant contribution to our ambitions to become the most active county in England.”

Having hosted the final stage of the first ever Friends Life Women’s Tour in May 2014, Bury St Edmunds now welcomes the opening stage in June 2015, starting off from where the inaugural race finished.

Cllr Sarah Stamp, St Edmundsbury Borough Council Cabinet member for Leisure, Culture and Heritage said; “We cannot be more pleased that the Friends Life Women’s Tour has chosen to return to Bury St Edmunds. The world class riders are inspirational, they really show that ‘this girl can’ and set a fabulous example to us all. There are so many opportunities this year for women and girls to get cycling – for daily travel, socially or training for the heat of competition, and I am looking forward to joining them.”

Having hosted a stage start at Felixstowe during the 2014 race, the Suffolk Coastal area will now welcome a stage finish for the first time.

Cllr TJ Haworth-Culf, Suffolk Coastal District Council’s Cabinet Member with responsibility for Customers, Communities and Leisure, said: “Suffolk Coastal is delighted to be able to continue to support the Friends Life Women’s Tour. We have had a great response from local people since we announced this news. The first stage finishing here will give a boost to this beautiful seaside town, bringing in extra tourism and raising the profile of both Aldeburgh and the entire District, while also encouraging people to have healthier lifestyles.  I am sure the people of Aldeburgh, and those along the entire route, will turn out to support this exceptional event.”